Uniting Ceredigion's past with the future 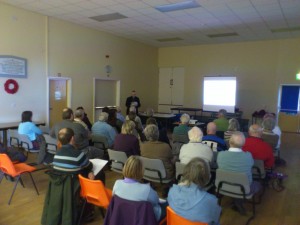 larger image
The autumn 2012 meeting was held in Llwyncelyn on 10th November, and looked at Pubs, Inns and Temperance.
Speakers at the autumn meeting included William Troughton from NLW who spoke about the history of the pubs and breweries of Aberystwyth and Nigel Callaghan who spoke about the Temperance movement. Helen Palmer introduced a project that is being proposed by NLW to digitise the Tithe maps of Wales, and suggested that Forum members may wish to work together on a project looking at the historical pubs of Ceredigion, as well as other related topics such as temperance and breweries.

The general feeling of the members at the meeting was that this would be an excellent project and that they woudl discuss it within their own groups.

It was decided that a special meeting to discuss the Pubs project would be held in the New Year.